Telecoms M&A totaled US$16.1 billion in the first quarter 2020, a small 1% rise on the previous quarter—the second quarter in a row which saw an increase in value. The largest transaction of the quarter was the US$3 billion sale of internet service provider Deutsche Glasfaser to Swedish PE firm EQT and Canadian pension fund OMERS.

M&A targeting UK companies reached US$62.6 billion in total in the first quarter of 2020, a 77% quarter-on-quarter rise and the highest total of any quarter since Q2 2018. This was mainly due to one deal, insurance group Aon’s US$35.6 billion takeover bid for Willis Towers Watson. 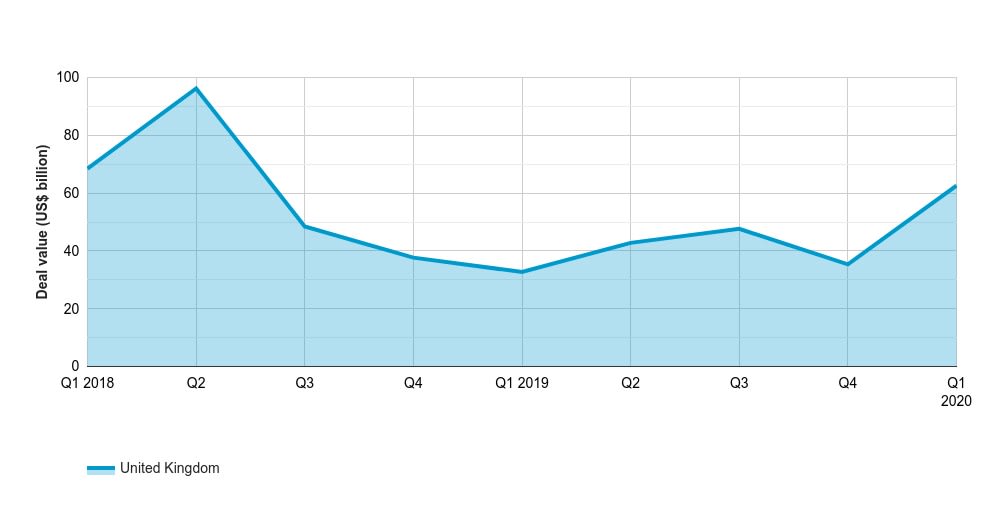 The first quarter of 2020 saw total deal activity targeting German companies reach US$55.5 billion, the highest of any quarter since Q3 2013, which recorded deal value totaling US$63 billion. The largest of these deals was the US$18.8 billion carve-out of industrial group Thyssenkrupp’s elevators unit by a PE consortium led by Cinven and Advent. 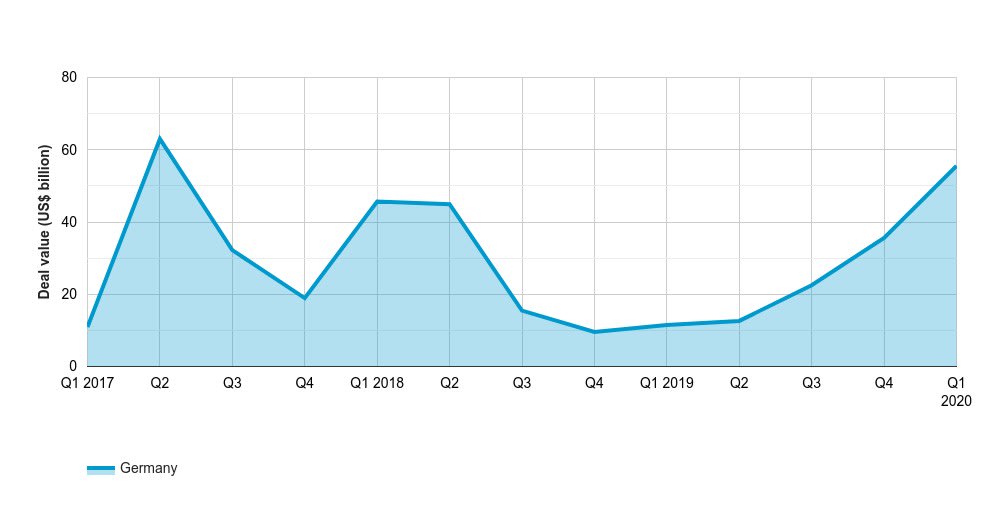 Financial services M&A in the US totaled US$179.6 billion in 2019, the highest annual total since 2015 and a 118% year-on-year rise. The two largest deals of the year were the US$29 billion acquisition of TD Ameritrade by The Charles Schwab Corporation and the US$28.1 billion merger between SunTrust Banks and BB&T. 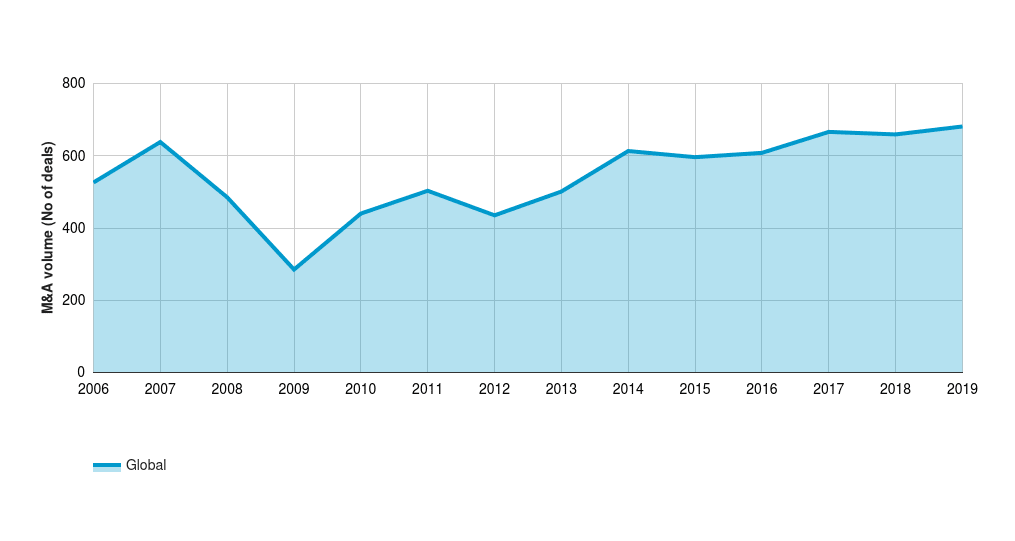 Total M&A value in the industrials and chemicals was US$133.6 billion in the fourth quarter in 2019—the highest of any sector that quarter. This marks the first quarter since Q1 2017 that TMT was not the top sector by value. The largest transaction of the quarter was a domestic US deal which saw International Flavors & Fragrances acquire Dupont’s Nutrition & Biosciences unit for US$26.2 billion. 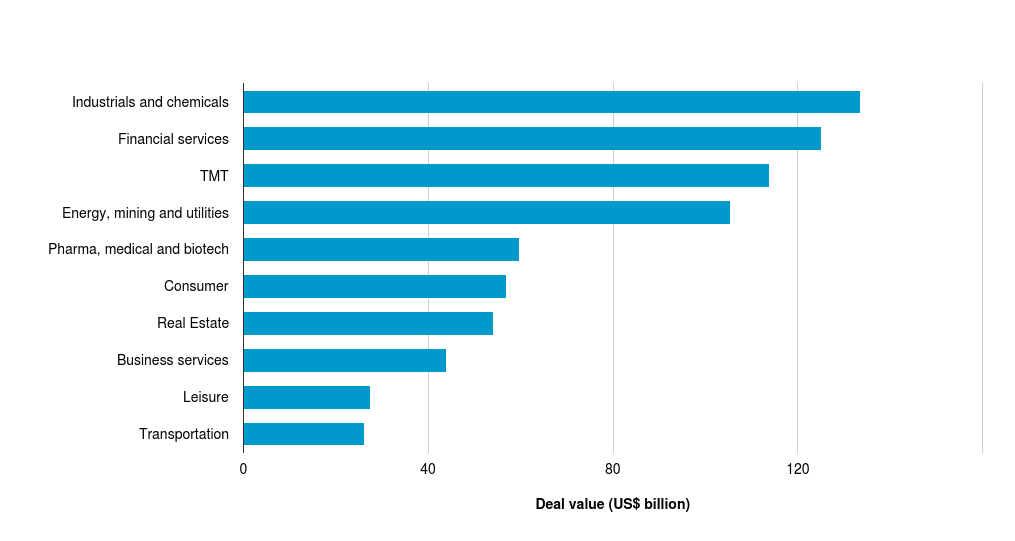 The global leisure sector saw cross-border dealmaking total US$53 billion over 2019, the highest annual value since 2014. This is in spite of the fact that deal volume fell to 255 deals in 2019, down from 278 deals the year before. The largest cross-border transaction of the sector was the US$10.4 billion sale of Canadian gaming technology firm Stars Group to Ireland’s Flutter Entertainment.

Private equity activity in the technology, media and telecoms sector reached its highest annual total on Mergermarket record (since 2006) in Western Europe in 2019. There were 468 PE-related deals in the region over the course of the year, a 9% year-on-year rise. Exits, buyouts and secondary buyout volumes were all up on 2018.

Australia’s outbound cross-border M&A in 2019 totaled US$33.3 billion, the highest yearly total in over a decade, although volume dropped to 108 deals, the lowest annual total since 2014. Much of this activity was driven by financial sponsors, in transactions such as IFM Investor’s US$10.2 billion acquisition of US-based oil and gas firm Buckeye Partners—the year’s largest. 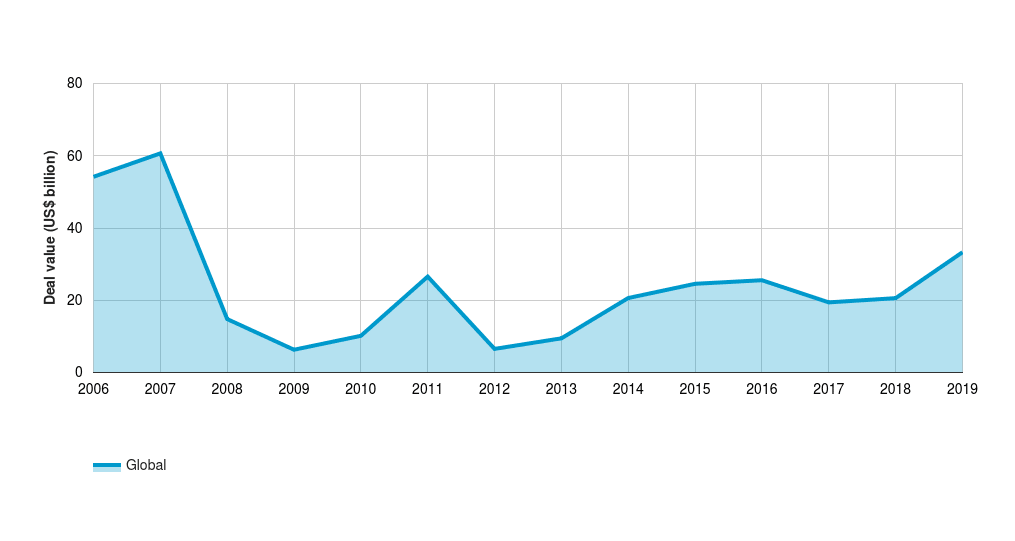 Global real estate M&A in the fourth quarter of 2019 totaled US$54.2 billion, the highest in eight quarters, while volume totaled 88 deals. The largest real estate deal of the quarter was the US$5.6 billion acquisition of Japanese hotel firm Unizo by a consortium of Unizo employees and US-based PE firm Lone Star. 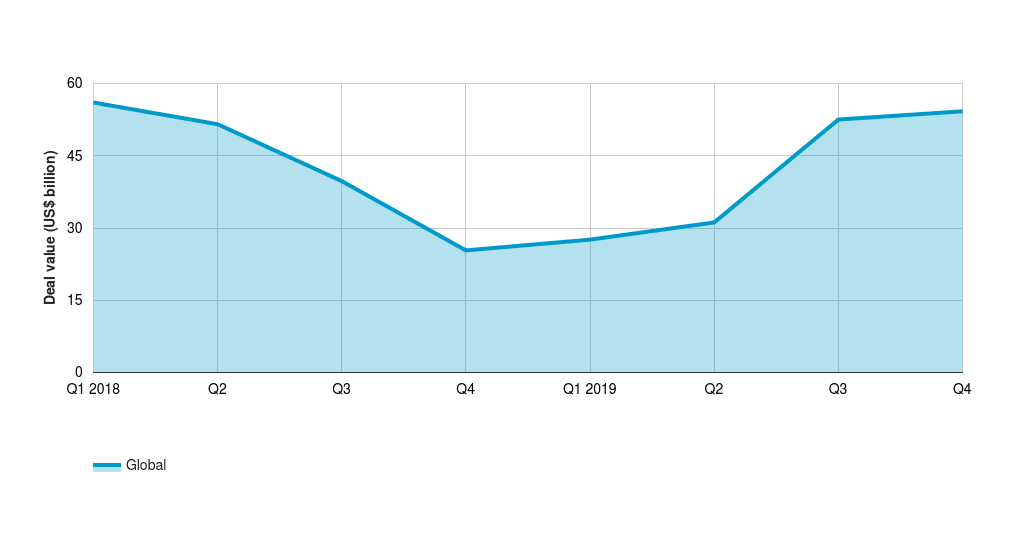 Outbound M&A from French bidders in 2019 totaled US$104.9 billion. The largest deal of the year was the US$16.6 billion acquisition of US-based jeweler Tiffany to luxury fashion house LVMH.

Cross-border dealmaking fell to 1349 deals in the third quarter of 2019. This is the lowest quarterly volume in over five years, since the 1342 deals recorded in Q1 2014. 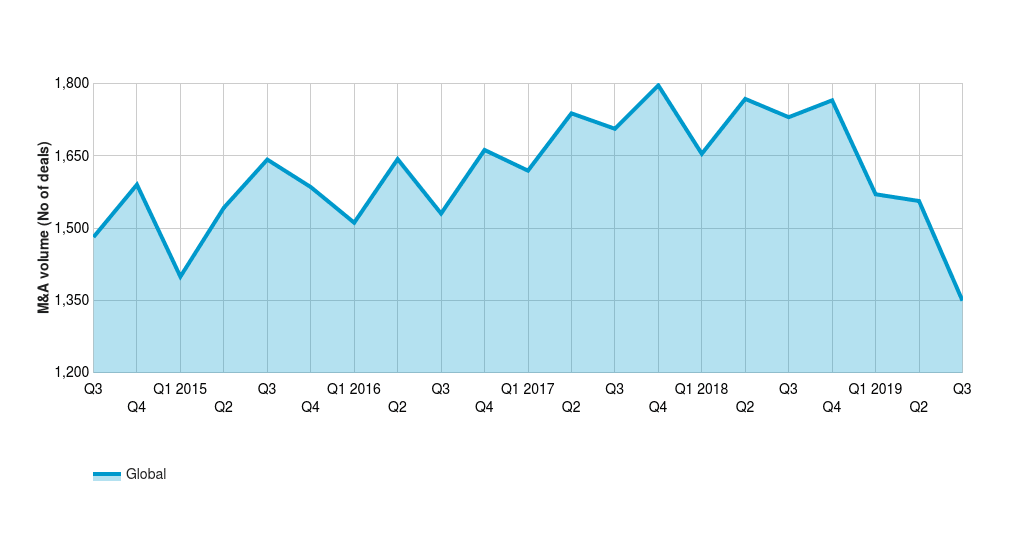 In the first three quarters of 2019, US$378.23 billion in deal value was agreed in the pharmaceutical, medical and biotechnology (PMB) sector. This is only 3.6% below the highest annual total on Mergermarket record, in 2015 (US$392.33 billion). 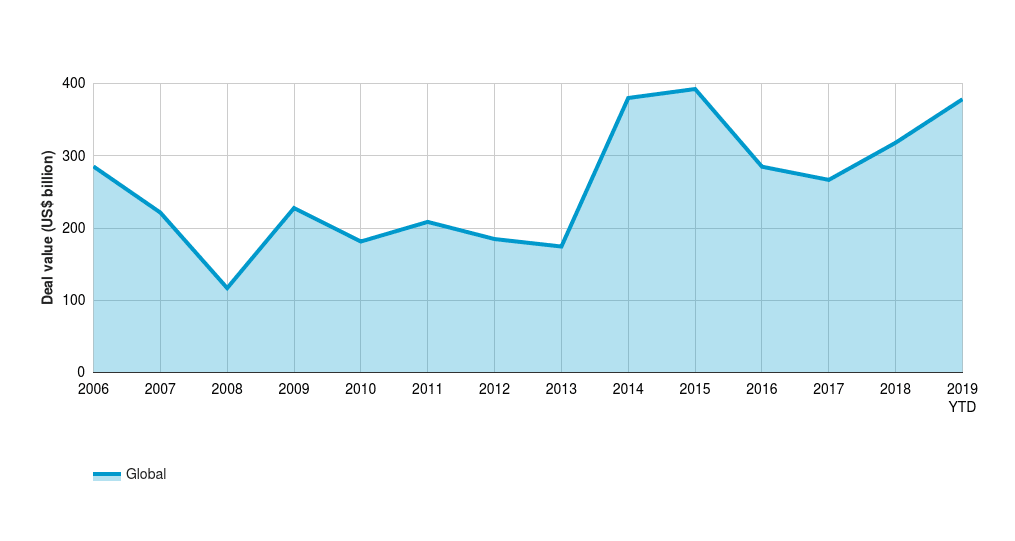 Cross-border private equity activity in the oil and gas sector totaled US$20.27 billion in the first nine months of 2019, already the second highest total of any year of the past decade except for 2011, which registered US$37.73 billion in deal activity.

Private equity deal value in the transportation sector rose to U$19.28 billion in Q3 2019, a 179% rise on the previous quarter. This represents the second highest quarterly value in the past decade, below only the US$27.44 billion total recorded in Q3 2017. 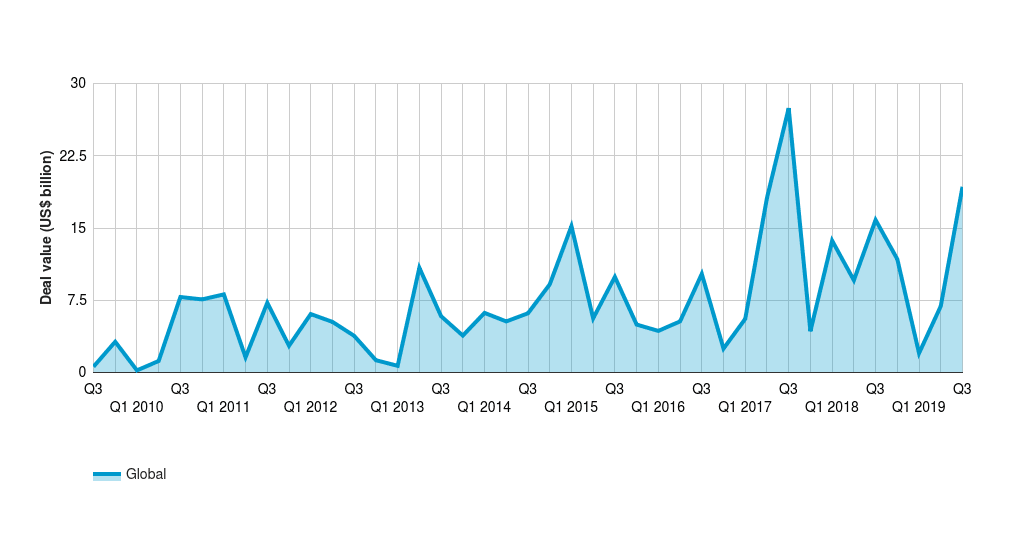 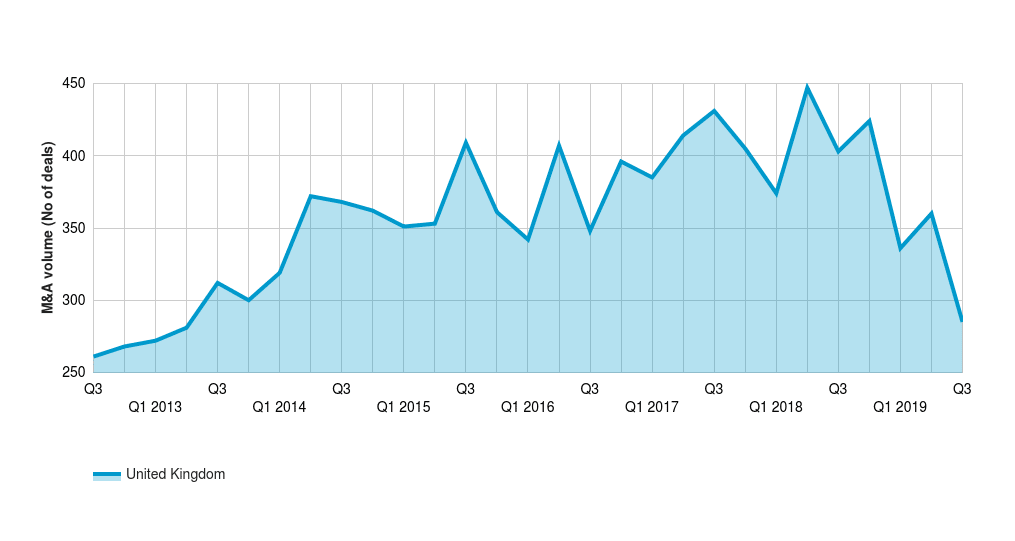 US$94.97 billion in cross-border M&A value was agreed in the consumer sector in the first three quarters of 2019. Already, this is 6% above the total in the entirety of 2018. 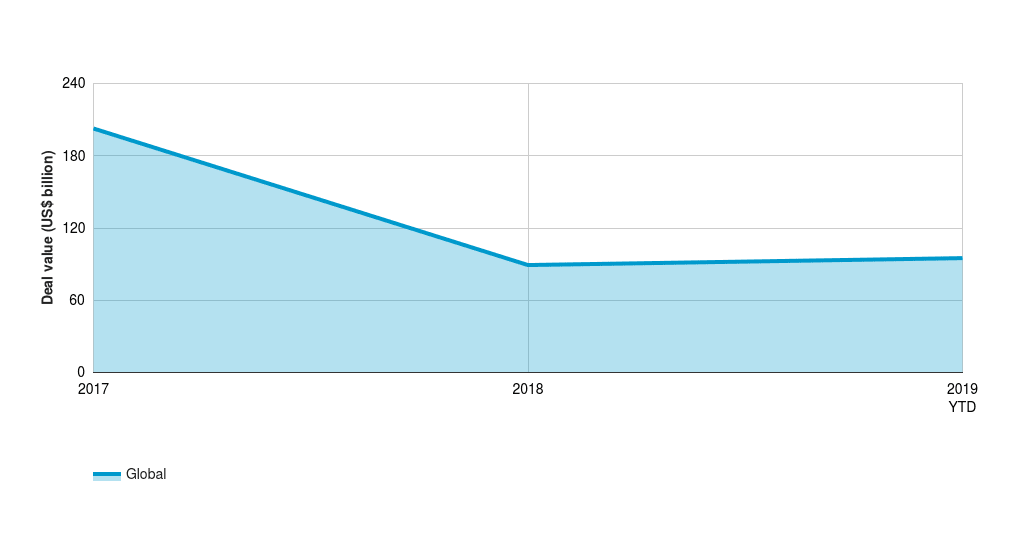 Canadian M&A totaled US$31.67 billion in value in the third quarter of 2019, the highest for any quarter since Q1 2017, which registered US$38.71 billion in deal activity. High-profile deals include the US$8.5 billion investment in transportation company 407 International by the Canada Pension Plan Investment Board (CPPIB). 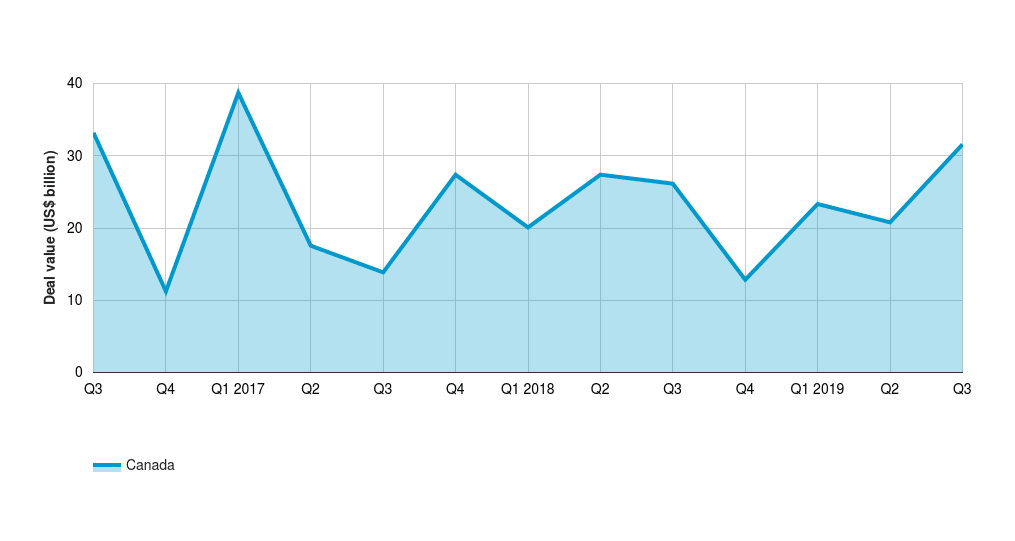 The US was not only the best-performing country in terms of total M&A value in Q2 2019, but overwhelmingly dominated the value chart. M&A involving US-based targets totaled US$494 billion, taking up 54% of global M&A in Q2—in contrast, the US took up 43% of global M&A across 2018. 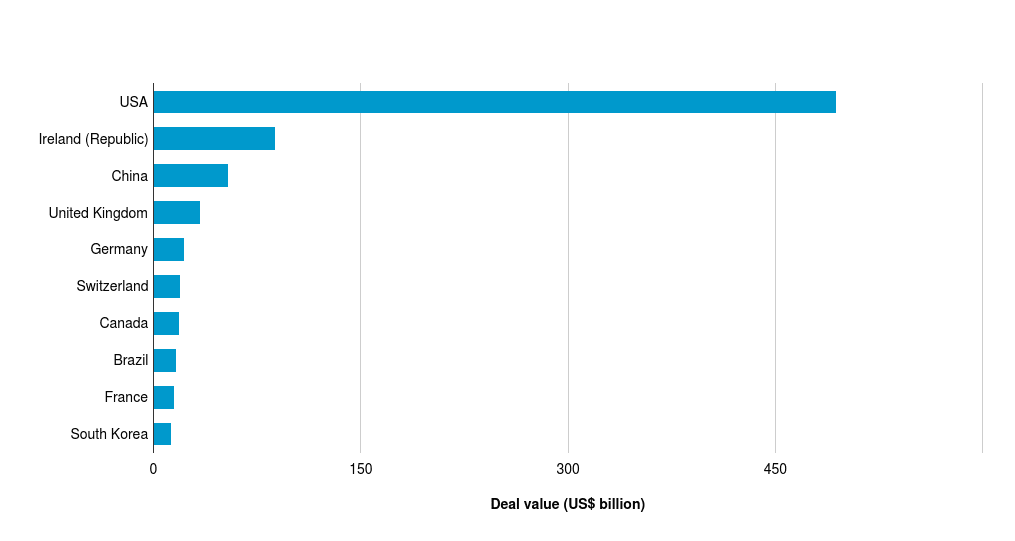