Vietnam M&A heads for another record in 2021

Vietnam’s M&A activity is set for another robust year following 2020’s potent performance. In the first three quarters, deals with disclosed value totaled US$3 billion. With three months of dealmaking left in the pipeline, 2021 is on track to overtake 2020’s annual total of US$3.9 billion. 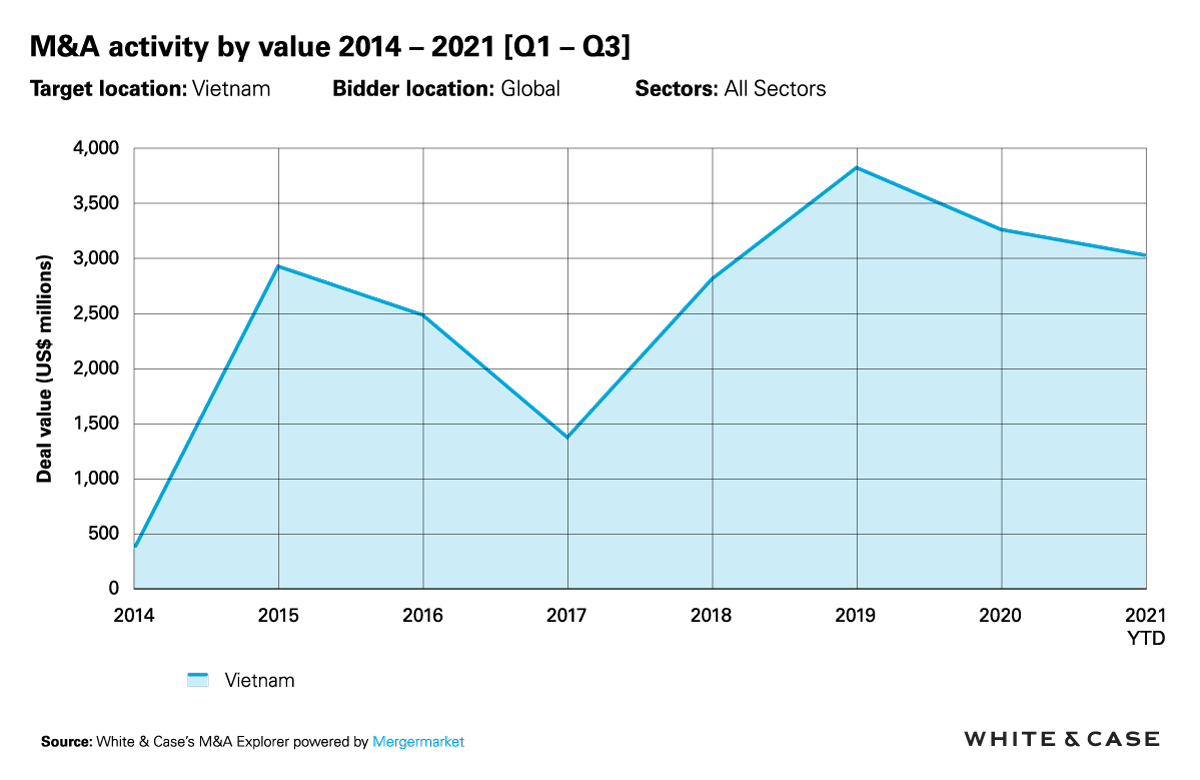 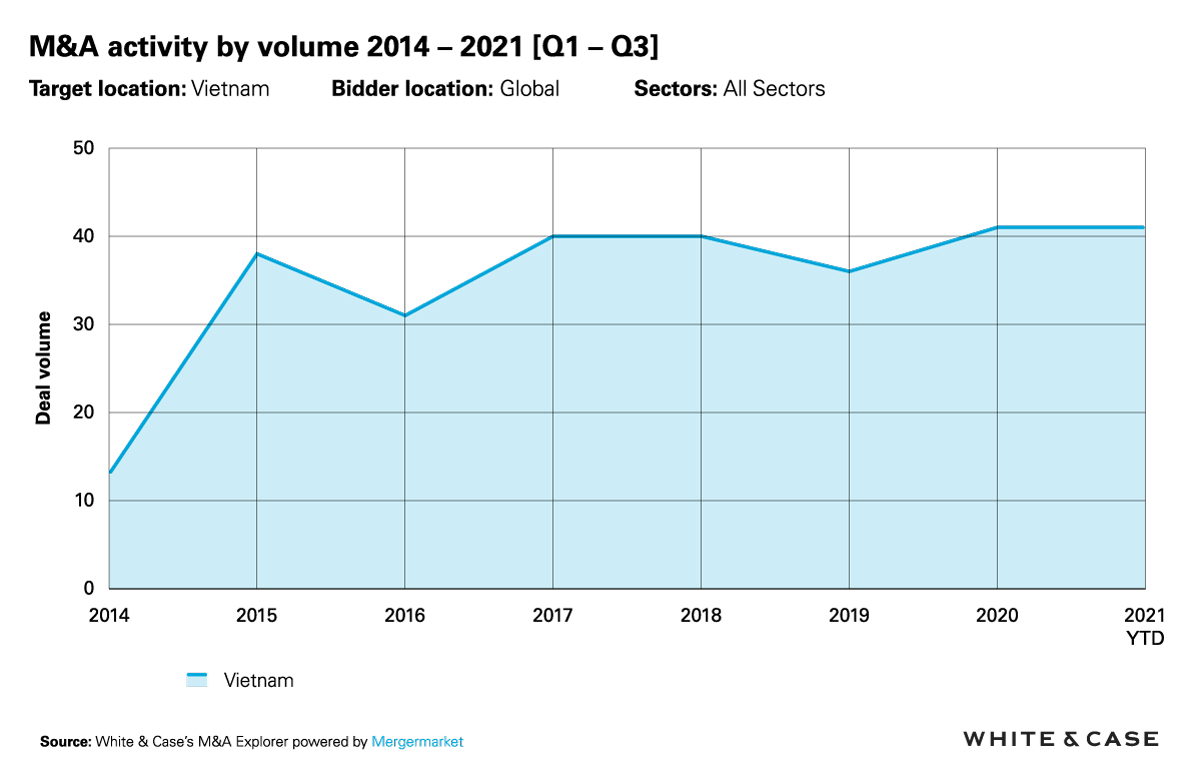 This strong performance was largely due to an active second quarter. The total volume of deals came to 19 during the quarter, reaching the highest quarterly volume on Mergermarket record. A quarterly deal value of US$2.5 billion, meanwhile, marked the second-highest quarterly value on record, below the US$5.2 billion struck in Q4 2017.

Although deal activity dipped in the third quarter after a wave of lockdowns due to an outbreak of the Delta variant, containment measures have been eased as of October. A backlog of manufacturing orders should ensure a swift recovery.

As was the trend in 2020, activity continued to be spread evenly across a variety of sectors, reflecting diversity within the Vietnamese economy. The largest deal of the year was Japan-based SMBC Consumer Finance’s (SMBCCF) US$1.4 billion acquisition of a 49 percent stake in consumer loan provider VPBank Finance (FE Credit). The deal is part of SMBC Group’s move to seek further growth opportunities in Asia, with FE Credit currently owning an estimated 50 percent share in Vietnam’s consumer finance market.

Another deal that targeted Vietnam’s fast-growing consumer finance industry was Thailand’s Bank of Ayudhya’s US$69 million purchase of SHB Finance from Saigon-Hanoi Commercial Joint Stock Bank. The deal will give the Thai lender access to SHB’s estimated 200,000 borrowers, helping expand its presence in Southeast Asia.

As a result of these deals, the financial services sector attracted the highest deal value across all sectors during Q1-Q3 2021, with a total of US$1.5 billion in deals with disclosed values recorded.

While financial services topped the value table, the industrials & chemicals sector generated the most deals of any sector. A total of seven deals announced during the first three quarters of the year has already overtaken 2020’s annual total.

Dealmaking within the electronics space resulted in some sizable deals, such as South Korean Sunji Electronic’s US$47.7 million acquisition of Bangjoo Hi-Tech, a manufacturer of electronic components and circuit boards.

Despite continuing COVID disruption, Vietnam continues to establish itself as a regional hub for electronics production. The country’s electronics exports have climbed from US$47.3 billion in 2015 to US$96.9 billion in 2019, ranking it 12th in the world.

Domestic activity remained dominant in 2021, following an active 2020. A total of 20 deals were announced in Q1-Q3, just three deals behind 2020’s record annual total. The healthy level of activity displays a growing confidence among local firms as they look to beef up their capabilities and scale up operations.

The largest domestic deal to take place so far in 2021 was GTNFood’s US$203.5 million merger with its subsidiary, husbandry company Vilico (Vietnam Livestock Corp.). The deal, part of the restructuring of parent company Vinamilk, will see GTN Foods delist and transfer all rights and assets transferred to Vilico. Through the deal, which is awaiting regulatory approvals, Vilico will expand its presence in Vietnam’s breeding and meat processing market.

Another notable domestic deal was Dong Nai Plastic’s US$45 million acquisition of a 51.78% stake in tile and brick manufacturer CMC Joint Stock Company. Through the acquisition, the plastics manufacturer will expand its position as a supplier of materials for civil and infrastructure construction works.

Inbound interest in sizable local deals is on the rise, with eight of the top ten deals of the year carried out by overseas bidders. Aside from the recently mentioned corporate transactions, global private equity (PE) houses are becoming more active, with high-growth sectors such as retail and edtech attracting particular interest.

The highest-valued inbound PE deal of the Q1-Q3 period was the acquisition of a 5.5% stake in The CrownX Corporation—the retail arm of Vietnamese conglomerate Masan Group—by a consortium led by Alibaba Group and Baring Private Equity Asia. The deal, valued at US$400 million, will build the company’s digital capabilities with the aim to accelerate the offline to online (O2O) market in Vietnam.

US PE houses were also active, as seen in KKR’s US$100 million investment in education services provider EQuest Education via its Global Impact Fund. EQuest is currently the largest private educational provider in Vietnam, and KKR’s investment aims to expand the company’s edtech capabilities further.

While the Vietnamese government was able to successfully contain the COVID pandemic in its early stages, the Delta variant of the virus hit the country hard, leading to strict shutdowns affecting factory output and exports. The Asian Development Bank revised its forecast for GDP growth for the country from 6.7% to 3.8% in September. Even with this alteration, Vietnam’s economy is still forecast to grow faster than the Southeast Asian regional average of 3.1%.

The endurance of Vietnam’s dealmaking activity in the face of the ongoing COVID disruption displays both market resilience and an enduring appetite for local assets. Strong underlying fundamentals such as an educated, low-cost workforce, a burgeoning middle class, and a stable political climate will continue to make the country an attractive investment destination.

High-growth industries such as consumer finance, electronics and retail will continue to attract attention from both strategic and private buyers, providing plenty of opportunities for dealmaking in the final quarter of the year. The easing of restrictions in October and the ongoing vaccination program will only further boost the country’s recovery.

2021: A spectacular year for SPACs

From record SPAC IPOs and M&A deal flow to the SEC issuing a variety of pronouncements, last year was one to remember.

Deal value exceeded US$1 trillion in every quarter for the first time in history, in just one example of the record-shattering 2021.