M&A in Vietnam surged in Q3, thanks to an economy that has proved resilient in the face of a global pandemic

M&A in Vietnam has been remarkably robust in 2020. The total volume of deals over the first three quarters of the year has come to 37 deals, one more than in the same period in 2019. Although value decreased 16% over the same period to US$3.2 billion, this was still a far less steep rate of decline than global M&A deal value, which fell 28% over this period. 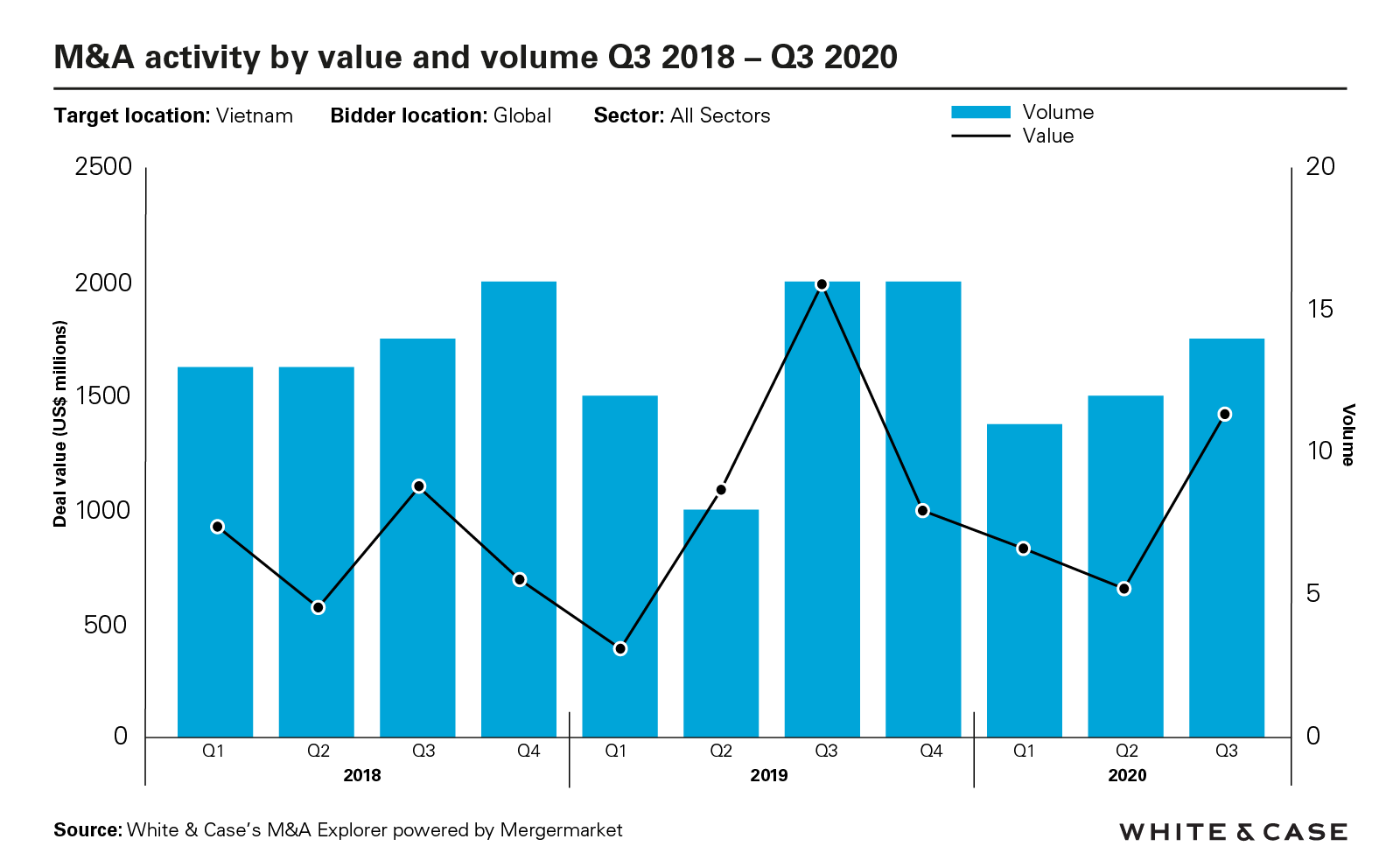 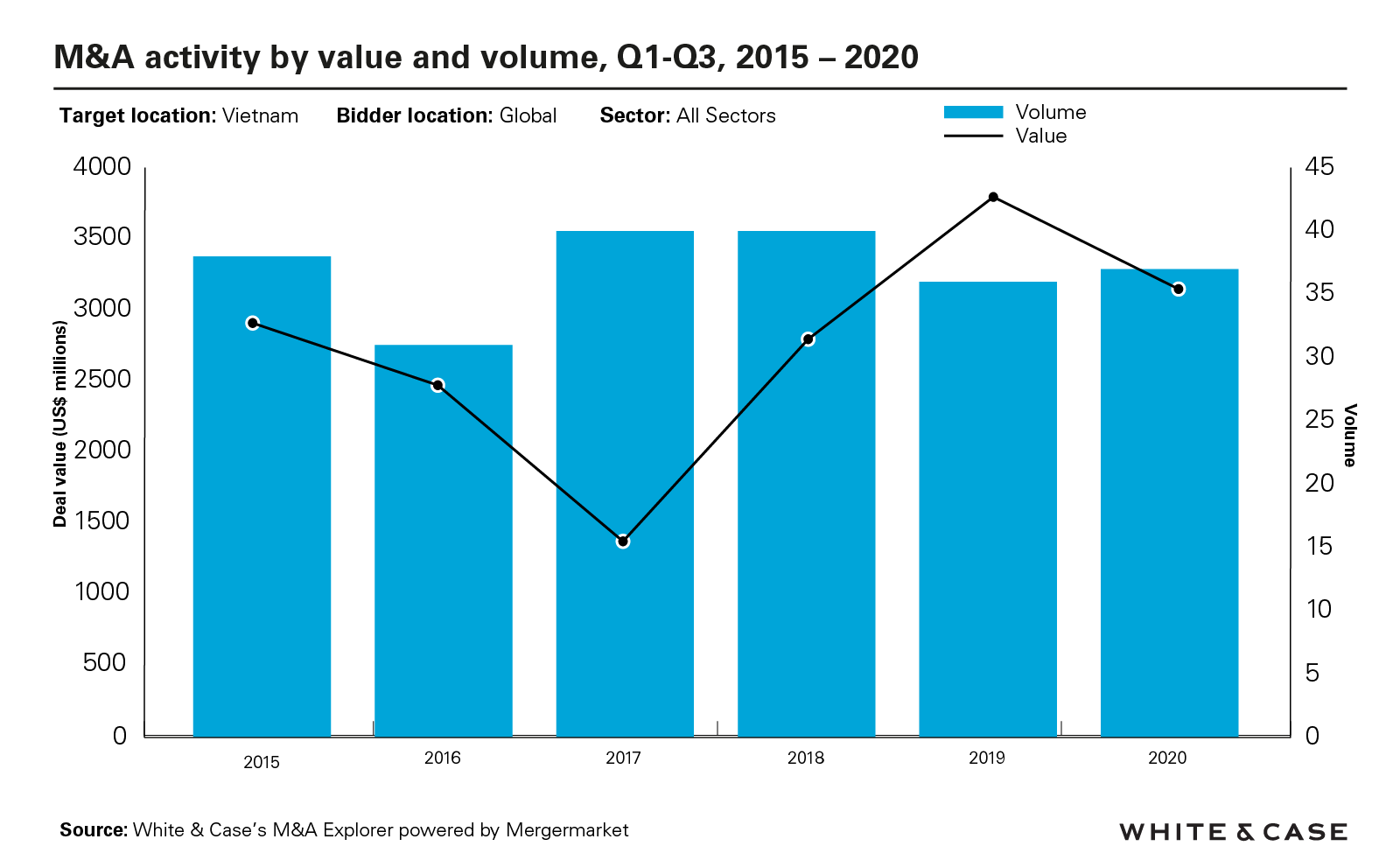 The third quarter of 2020 was particularly robust, seeing total value of US$1.6 billion—more than double the US$689 million of the previous quarter. Volume also rose, from 12 to 14 deals over the same period.

This mirrors a rise in global M&A in the third quarter—value rose by 141% globally compared to the previous quarter, while volume increased by 9%. Vietnam’s dealmaking activity, however, stands out when compared to its neighbors. Thailand—usually a larger M&A market than Vietnam—recorded only US$48 million in activity in the second quarter and only US$438 million in the third.

Moreover, the deals announced in Vietnam across the year reflect a broad cross section of the country’s economy: real estate, financial services, manufacturing, pharmaceuticals, entertainment and tech deals are all represented. This depth of dealmaking points to an economy that remains fundamentally attractive to investors despite—and perhaps because of—global headwinds.

The country’s M&A market was dominated by domestic activity: Vietnamese bidders were responsible for nearly two-thirds of the total value recorded up until the end of Q3. In fact, the US$2 billion in deal value recorded in domestic M&A activity in the year to date in 2020 in Vietnam already surpasses the annual total by value of domestic M&A in any year since 2006 (when Mergermarket records began). Two of the country’s conglomerates were responsible for a large portion of this deal activity.

The largest deal so far in 2020 saw Masan Group acquire a 12.6% stake in its joint venture CrownX from partner Vingroup Joint Stock Company for US$862 million. CrownX was created at the start of this year, through a combination of Vingroup’s retail and agriculture units and Masan Consumer in a US$410 million transaction. Through the creation of CrownX, Masan Group aims to modernize Vietnam’s fragmented grocery market.

This transaction came amid a surge in food retail M&A, as consumers globally spend more on groceries during the COVID-19 pandemic.

Vingroup was also involved in the second-largest transaction of the year, which saw US PE firm KKR and Singaporean sovereign wealth fund Temasek make a US$650.7 million investment in its portfolio company Vinhomes Joint Stock Company. Vinhomes is listed on the Ho Chi Minh Stock exchange and is engaged in the development, sale and management of mixed-use residential real estate projects. It is the country’s largest commercial real estate developer and the name behind Vietnam’s tallest building, Landmark 81.

The deal was announced in mid-June and sees the consortium taking a 6.12% stake in Vinhomes. Parent company Vingroup will continue to be the controlling shareholder of Vinhomes. The deal comes a year after South Korean conglomerate SK Group invested US$1 billion in Vingroup, one of Vietnam’s biggest conglomerates, in exchange for a 6.15% stake.

The third-largest deal in Vietnam in 2020 was another example of an East Asian business acquiring a minority stake in a Vietnamese firm. Japan-based Aozora Bank invested US$138 million to acquire a 15% stake in Vietnamese bank Orient Commercial Joint Stock Bank (OCB) in a deal announced in January.

A number of factors underpin the appetite of businesses from East Asia for acquiring stakes in Vietnamese companies.

One is the contraction of domestic markets. Many mature East Asian economies, notably South Korea and Japan, are at a demographic tipping point. Population growth in South Korea is flatlining, while in Japan, the population has shrunk by nearly a million people over the past five years. By contrast, Vietnam’s population has leapt by more than four million over the same period.

In the case of banks domiciled in mature East Asian economies, not only shrinking populations but also low domestic interest rates are encouraging lenders to seek stronger returns in markets such as Vietnam.

There are a number of reasons Vietnam is continuing to attract foreign investors at a time when deal flow elsewhere in the region has slowed:

Vietnam benefits from having political stability and a government with a global mindset, as evidenced by it entering into the European Union-Vietnam Free Trade Agreement which came into effect on August 1, 2020 (only the second free trade agreement between the EU and an ASEAN country, after Singapore), and which will make Vietnam more attractive to foreign investors. Vietnam’s new law on public-to-private partnerships (PPPs) will also come into effect on January 1, 2021. Vietnam is set to continue its evolution from being a manufacturer of low-cost goods, such as clothing, to being an increasingly important manufacturer of high-tech goods and electronics.

Hunger for consumer goods is spurring deal activity. In addition to Masan Group’s efforts to build a modern supermarket chain in the country through CrownX, the acquisition by Thailand-based Power Buy Company Ltd. of a 51% stake in Vietnam’s NKT New Solution and Technology Development Investment Joint Stock Company underlines where the opportunities lie. Power Buy paid US$114.2 million to take full control of NKT, an investment holding company with interests in electronics retailing. The acquisition will enable Power Buy to expand its electronics retailing operations in Vietnam.

There has also been a steady increase in market activity in the renewables sector in Vietnam. These include, in Q3 2020, the US$66 million acquisition of EI Wind Mui Dinh Wind Farm by BRE Singapore, a subsidiary of Thailand-based energy company Banpu.

Thai investors have been particularly active in the sector, but a broad range of international energy project developers and corporates have been looking to expand into both solar and wind renewables projects by way of M&A. As the market continues to develop, there are increasing signs of significant M&A opportunities.

Vietnam will remain an attractive destination for inbound investment in South East Asia, particularly relative to its neighbors. With low labor costs, a growing, highly educated and young population, urbanization and a burgeoning middle class, Vietnam presents an attractive growth story both for investment for export and investment for domestic consumption.

For an investor allocating funds to South East Asia, Vietnam stands out among its peers for its handling of the COVID-19 pandemic, political stability and embracing of a more open economy that actively welcomes foreign investment and international collaboration.

We highlight the key UK & European M&A trends in H2 2021 and H1 2022, and provide our insights into the outlook for M&A moving forward.

Q2 PE dealmaking fails to live up to record 2021

A host of megadeals bumped up deal value in the sector, but regulatory and economic headwinds remain