The market has already seen a wave of de-SPACs this year, with Dealogic recording 176 such deals worth in excess of US$386.1 billion

Special purpose acquisition companies (SPACs) continued to top fundraising records through the first half of 2021 despite the market's pause for breath after Q1 2021.

After cresting at an all-time high of US$82.6 billion in 2020, global investor appetite for SPACs—blank check companies that raise equity on stock markets to invest in M&A transactions—showed no sign of slowing in 2021. By May of this year, the market had already surpassed last year's record, with 330 SPAC vehicles raising US$103.8 billion, according to Dealogic.

And while some of the heat has left the SPAC market recently—shares in some SPACs have fallen post-acquisition in recent weeks, as retail investors and institutions have traded out—the vast overhang of capital that has already been raised and is ready for deployment over the next two years will continue to generate deal flow for lenders and other M&A market participants through the rest of 2021.

The unprecedented levels of SPAC fundraising have already sparked a corresponding uplift in M&A activity involving SPACs. These vehicles typically have 24 months to either consummate an M&A transaction (known as a "de-SPAC," where the acquisition target merges into the SPAC to become the listed company) or return capital to investors. The market has already seen a wave of de-SPACs this year, with Dealogic recording 176 such deals worth in excess of US$386.1 billion.

Even with this rate of dealmaking, these de-SPAC deals trail the pace of new SPAC IPOs announced in Q1 2021, meaning there are many SPACs still seeking targets. This sets the stage for sustained high levels of dealmaking from SPACs through the rest of the year, with these vehicles being used more aggressively and pursuing deals quickly. According to PitchBook, the median time gap between a SPAC IPO and a de-SPAC reverse merger in 2020 was only seven-and-a-half months.

For debt markets, this wave of activity has opened up windows for companies to pay down debt. SPACs are also targeting ever-bigger deals which, in time, could see SPACs start to tap debt markets more actively to secure the financing needed to reach higher valuations. 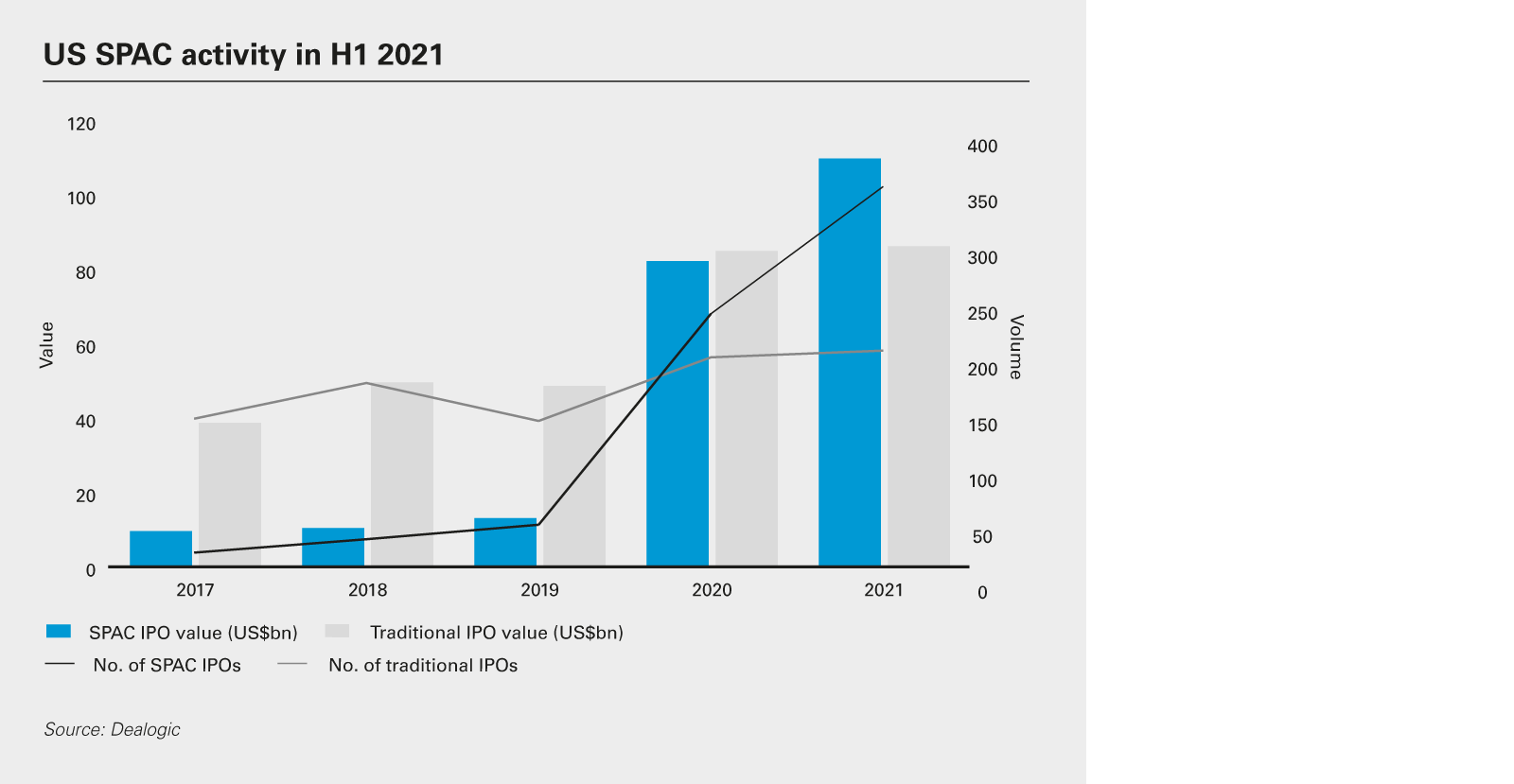 Sponsors and lenders ride the wave

In most SPAC deals in the market so far, however, companies have moved to either refinance or pay down debt, especially when the vendor is a PE firm that has used leverage in previous deal structures.

In many cases, Standard & Poor's has issued improved ratings or ratings outlooks for companies that have done deals with SPACs and reduced their leverage multiples post-transaction.

For example, the ratings agency lifted the credit outlook on hardware and home improvement company Hillman Cos from B-/CreditWatch stable to B-/Positive after the business reduced its leverage multiple from 8x to 4.5x following a SPAC deal.

In another example, the acquisition of Platinum PE-backed data center cooling equipment manufacturer Vertiv by the GS Acquisition Holdings Corp SPAC—sponsored by Goldman Sachs and run by former Honeywell chief executive David Cote—saw Vertiv raise a US$2.2 billion term loan to refinance its existing term loan and high yield bonds. The new term loan was priced at LIBOR +3 percent—a margin 1 percent lower than that of its previous term loan.

According to PitchBook, the size of target companies is expanding relative to the size of the SPAC after its IPO, reaching an average of 5.3x early in 2021. At the extreme end of the scale, there are cases like Grab, the Singapore-based Southeast Asian ride hailing app, which achieved a US$39.6 billion valuation after agreeing to a merger with Altimeter Growth Corp, a Nasdaq-listed SPAC. Altimeter Growth Corp only raised US$450 million when it listed as a SPAC.

To date, SPAC sponsors have primarily opted to bridge the gap to company valuations through private investment in public equity (PIPE) deals, where private investors club together to fund deals in companies about to go public. In the case of the Grab investment, for example, asset managers BlackRock, Fidelity and T. Rowe Price, along with Morgan Stanley's Counterpoint Global fund and Singaporean sovereign wealth fund Temasek, put together a US$4 billion PIPE to support the SPAC deal for Grab.

But as SPAC deal sizes increase, PIPEs could prove insufficient to bridge the gap to valuations alone—rollover equity as well as debt may be required.

Software company E2Open, for example, agreed to a US$2.5 billion SPAC merger and then went to market to raise a US$525 million term loan B and a US$75 million revolver for these purposes, according to S&P.

Attitudes are shifting, thanks to changes in corporate governance

After four quarters in a row of exceptionally high PE activity, Q3 2021 has continued the trend, recording the highest value and volume of any third quarter on record